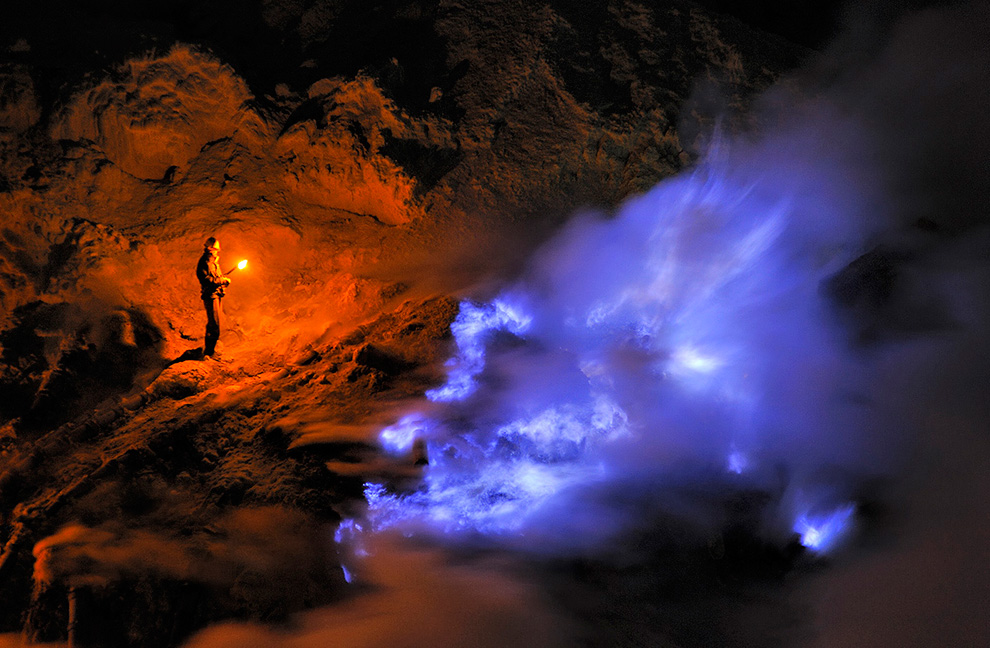 Blue Flame Ijen Crater, Banyuwangi was known as one of the most wonderful craters in Indonesia. The existence of Blue Flame Ijen volcano makes all visitors curious to know whether it really exists on Not every night?
Huge domestic and foreigners enjoy the Blue Flame Ijen Crater tour only to learn about the process of Blue Flame appearance. After they get to the top, they really gain the original response that Blue Flame has really existed every night. Moreover, they also know about a process of the local miners doing activity taking sulfur from the bottom crater, green acid lake and yellowish sulfur which appears from the pipe and only appears every night exactly beginning at 18.00 PM and finishing at 05.30 AM. Since National Geographic mentioned the electric crater, tourist numbers visiting this volcano have increased up to thousands every week.

The existence of Blue Flame Ijen Crater in Banyuwangi

The Stunning Blue Flame Ijen Crater occurred every night wherein a dazzling electric-blue flame Kawah Ijen can often be seen streaming down the mountain at night, the fire glow unusual for a volcano with lava.
The Blue Flame Ijen Crater glows from the combustion of sulfuric gases, Grunewald explained, and the gases emerge from cracks in the volcano at high pressure with temperature up to 1,112°F (600°C). When they came in contact with the air, they ignited, sending flames up to 16 feet (5 meters) high. Some of the gases condense into liquid sulfur, "which continues to burn as it flows down the slopes.
Ijen Crater was described in antiquity in Italy on the south slope of Mount Vesuvius and on the island of Vulcano. The Blue fire may also be observed at the base of the plume of erupting volcanoes when ash explosions occurred. Ijen Crater, Banyuwangi is the subject of a new documentary released earlier this month that was produced by Grunewald and Régis Etienne, the president of Geneva's Society of Volcanology. at the top of the volcano is the largest measure of such a body of water filled with hydrochloric acid. In fact, it's the acid that makes the water green.
Cynthia Werner and Grunewald are a research geologist with the U.S. Geological Survey (USGS) at the Alaska Volcano Observatory, Werner explained how the lake became so acidic: The volcano emitted hydrogen chloride gas, which reacted with the water and formed a highly condensed hydrochloric acid with a pH of almost 0. The lake has a volume of 1.3 billion cubic feet (36 million cubic meters), or about 1/320 of the volume of Oregon's Crater Lake. As the burning gases cool, they deposit sulfur around the lake.

Blue Flame Ijen Crater tour is the most requested tour package to see the Blue Flame which always appears every night. The trekking tour condition to reach its location is easier than the Semeru volcano tour but You must use a local guide because of trekking at midnight.
If You need to see the processing of Blue Flame, You must begin your tour from a Hotel near Banyuwangi or Bondowoso at midnight around 00.00 - 01.00 AM. It is suggested to use a rental hardtop. The trip from Banyuwangi or Bondowoso is 2 hours by Car to Paltuding (parking lot), from this parking lot, do climb to volcano rim for 2 hours accompanied by local guide then continue climb down to bottom crater for 45 minutes, Reach the bottom crater, You will see the stunning views appears from crater dome called Kawah Api Biru in Indonesian Languange.
Finish enjoying the Blue Flame Ijen Volcano tour Banyuwangi, come back to the rim and see the green acid lake and yellowish sulfur while You can take a photo for local miners hauling the Sulfur from bottom crater until the finish and return to Paltuding again. You will finish enjoying the Ijen volcano trekking package at 09.00 AM.
If You want to combine your tour between the Ijen Crater tour package with other nature tour package in Banyuwangi East Java Island, You can choose the trekking package of Ijen, Mount Bromo, Madakaripura for 4 days. So, You can choose to arrive in Banyuwangi and finish at Surabaya International Airport. Or You can visit Our contact for detailed information.
Ijen Crater Banyuwangi also called Kawah Ijen in Indonesian language, Mining sulfur in Ijen volcano is the one way to earn money by sulfur miners. Sometimes the miners spray water from a small pump onto the pipes to promote cooling and condensation. Sulfur stalactites sometimes form from the liquid sulfur dripping from the pipes then collected and sold to tourists.
Sulfur miners work at night under the eerie blue light flame to escape the heat of the sun and to earn extra income. The miners sell the sulfur for about 600 Indonesian rupiahs per kilo (less than 25 U.S. cents per pound). They can carry loads of 176 to 220 pounds (80 to 100 kilos) once a day or twice if they work into the night.
Java Island tour package from Banyuwangi, Surabaya, Malang, Yogyakarta, Bali :
The best time to enjoy Blue Flame Flame Kawah Ijen tour Banyuwangi on March - September. Before You have planning to see this crater, You can bring Jacket, Gloves, Long Pants, Hat, Gass Mask, Trekking Pole, and Mineral drinks. In order, You can make adaptation during You are inside the Crater dome. detail information about Blue Flame tour package, Accommodation, and Banyuwangi tour package facility, You can visit Our tour booking form.
Share :
Newer Post Older Post Home
Follow :