Ijen Crater is one of the popular destinations in Banyuwangi, Java Island Indonesia. It is located in the middle regency between Banyuwangi and Bondowoso regency. Ijen Crater has 2,386 meters high above sea level with 200 meters depth, It contains about 36 million cubic meters of sulfuric water and settled between Mount Merapi (2800 metres), Mount Raung (3,332 metres) and Mount Meranti (3,325 metres).
Ijen volcano tour presents a yellowish sulfur and it formed stunning landscape when looked at from the top. its caldera was firstly created by Van Bammelen in 1941. Then it was refined by several subsequent writers. This volcano has very large caldera with a number of other volcanic buildings, including Mount Raung usually called a true peak, and Mount Ranti which is also still active.

There are still many tourists who do not understand about the main job of local people around Banyuwangi which is close to Ijen Crater. They only know that the local people carry the baskets to the top, even though they have an important purpose for collecting the sulfur and transporting it for sale.
Mining the sulfur from the bottom of crater is the main job and very important for the local community to provide for their families.
Since early morning, the sulfur miners began to climb to the top of Mount Ijen which has a height of 2,386 meters, using flashlights on their heads, light jackets and gloves. The trip to the summit takes about two hours. After reaching the top, the miners descended the steep slope to get to the crater by carrying a bamboo baskets full of sulfur weighing about 70 kg, the miners again followed the rocky path to the top. Every now and then they stopped to rest.
Ijen Crater Banyuwangi has a largest lake with green color, It contains very high acidity of 5 ph and filled with water that has undergone volcanic mineralization. The yellowish sulfur creat stunning views when looked at from the crater rim. Inside the bottom Crater, there is a Blue Flame normally appears all nights. It is called Blue Flame Crater, the typical attraction mostly visited by visitors but need to trek down to the bottom crater when You want to see from the close distance.

The Phenomenon of Blue Flame 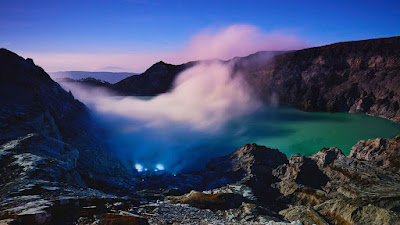 The Blue flame Ijen Crater is a nature process of sulfur occurred all nights begin at 18.00 PM and finish at 05.00 AM. it always appears everynight, most foreigners do trekking down to see the actual process of how the sulfur forms into hard, nice yellow colored rocks.
The Blue Flame Crater will seem very amazing when it is flaming up from the crater dome looks like the gas stove, It has about 600° celcius heat, it was created after the the last eruption occured.
To enjoy Blue Flame, You need to start your tour at midnight at 23.00 PM from the nearby place around Bondowoso such as Catimor Homestay, Arabica Homestay, and hotel around Banyuwangi. Before you start your tour to Ijen Crater, Hope You bring jacket, gloves, mineral drinks, headlamp, gass mask, trekking pole, trekking shoes and long pants. In order You able make adaptation confronting steep route, mountain gass and cold temperature.
Trekking tour to Mount Ijen Crater very recommended to use the local ranger from Paltuding (parking area) because You will do trekking tour for 3 kilometres along small path, the route condition is steep. So, You must use special trekking shoes, headlamp and bring 1 bottle mineral drinks.
Enjoy the Ijen Crater tour package, East Java Island is the one way to solve your desire when You are really curious to know the Blue Flame process. If You have more time after your tour in East Java Island, You can combine your tour with other interesting place like the tour itinerary below.

Ijen Crater Banyuwangi is still in East Java Island, Indonesia. The nearest route to reach this volcano is from Banyuwangi Harbor, You can take a motorbike taxi or car for 2 hours long. the route taken from Banyuwangi, then to Licin District. Then continue the journey to Jambu and then to Patulding. Then from Patulding, just walk through the path and the caldera cliff for 2 kilometers to Ijen volcano from Banyuwangi, it will take approximately a total distance of 38 kilometers.
The second route is from Surabaya or Malang City, the trip duration need 7 hours by car through Bondowoso City, then depart from Bondowoso, continued head to Wonosari, and continue to Sempol and finally to Patulding. From Patulding, The distance of the Bondowoso to the Paltuding rest area is 70 kilometers with beautiful views of coffee trees and pine forests.
If You are interesting to enjoy Ijen Crater tour package and Java Island tourism, You can make the booking within 2 months before, In order We can provide your facility enoughly because this volcano always full of visitors. Detail information about Our tour packages, You can visit Our booking form.
Share :
Newer Post Older Post Home
Follow :