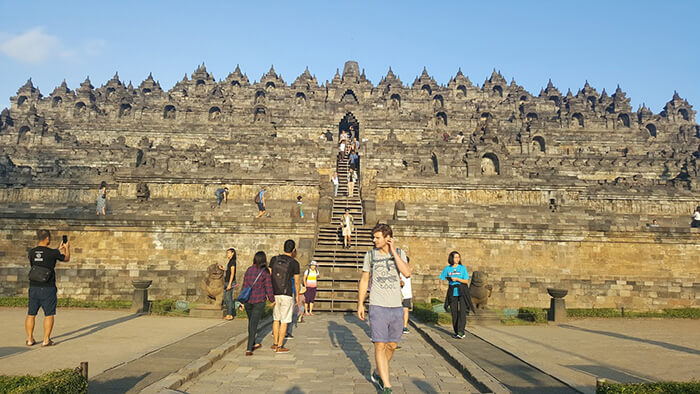 Borobudur Temple Yogyakarta is the main destination of the travelers who visit Jogjakarta City. This Temple built on the 8th - 9th centuries by Syailendra dynasty, Mahayana Buddhist temple . The Borobudur served as a symbol of the noble values and indigenous cult of ancestor worship and the Buddhist concept of attaining Nirvana.
The Borobudur Yogyakarta, Magelang was abandoned following the 14th century by the declining of Hindu kingdoms in Java Island, the Javanese conversion to Islam. The temple gained its worldwide acknowledgement of its existence in 1814, during British colonialism by the British ruler of Java Island.
The largest restoration project was undertaken between 1975 and 1982, Through the Indonesian government and UNESCO. During this early 20th century, The temples discovered that three Buddhist temples in the region, Borobudur, Pawon and Mendut Temple, are positioned along a straight line so it was concluded that a ritual relationship between Borobudur and other two temples must have an exist route, even though the exact ritual process is remaining unknown.
Candi Borobudur was designed in Javanese Buddhist architecture but also demonstrates the influences of Gupta art that reflects India's influence on the region, yet there are enough indigenous scenes and elements incorporated to make "Borobudur Magelang" uniquely Indonesian.

Borobudur Temple consists of nine stacked platforms, six square and three circular, topped by a central dome which is surrounded by 72 Buddha statues, each seated inside a perforated stupa. This historical place had decorated with 2,672 relief panels and 504 Buddha statues, and an extensive system of stairways and corridors with 1,460 narrative relief panels on the walls and the balustrades.
Borobudur Yogyakarta known as the world largest Buddhist temple as well as one of the greatest Buddhist monuments in the world and it has the largest and most complete ensemble of Buddhist reliefs in the world which made it  pronounced as one of the world heritage by UNESCO.
The monument is both of Borobudur shrine to the Lord Buddha and a place for Buddhist pilgrimage that is why this wonderful shrine is still being one of the premier tourist destinations of pilgrimage for Buddhists all over the world. The journey of Borobudur Magelang pilgrims began at the base of the monument and follows a path around the monument and ascends to the top through three levels symbolic of Buddhist cosmology: Kāmadhātu (the world of desire), Rupadhatu (the world of forms) and Arupadhatu (the world of formlessness).

Borobudur Yogyakarta is located on Jl. Badrawati of Magelang, Central. The Magelang area located approximately 40 kilometres northwest of Jogjakarta and 86 kilometres west of Surakarta. This temple stands highly in an elevated area between two rivers, the Progo and the Elo and two twin volcanoes, Sundoro-Sumbing and Merbabu-Merapi. The best time to enjoy the Sunrise on Borobudur, Magelang is in early hours while waiting for bright after Sunrise time, and You can see the morning light comes through the thousands of stupas.

A wonderful scenery that makes you feel a glimpse of nirvana. You may stay to take pictures for bulding, wandering around The Borobudur Magelang and stupas, or even enjoying the beautiful scenery up to the sunset on 05.00 in the evening. The entrance ticket cost for Borobudur Sunrise tour package is IDR 350.000 for local visitor and IDR 400,000 for foreign tourist.
Borobudur Yogyakarta, Magelang located in Central Java beside. If You are the first time visit the Jogjakarta, You can combine your trip between Yogyakarta and Mount Bromo Sunrise tour or other tour package option.
Detail information about Java Island tour package price, accommodation and other tour package facility, You can visit Our Contact.
Share :
Newer Post Older Post Home
Follow :