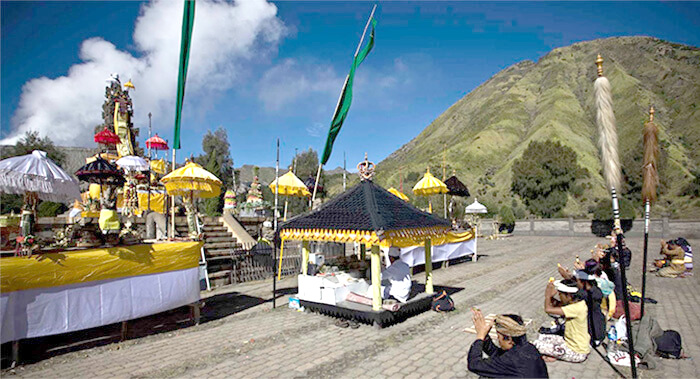 The Yadnya Kasada Ceremony Mount Bromo celebrated once in every year. The time existance of Yadnya Kasada Ceremony at Mt Bromo have the most important means for tenggerese tribes. They celebrated a greatest ceremony called Kasodo Ceremony, the Javanesse volcano festival to cure various diseases, problems experienced and to appease the nature from all disasters by the communities through an ancient Hindu mantras have recited by Hindu physician. These temple ceremonies are prayers to ask for blessings from the Gods and often last long into the night.
Derivation of The Yadnya Kasada Ceremony Mt Bromo observed by the Tenggerese tribes, descendant of princes Majapahit kingdom since the 13th century, living in the highlands of Bromo Cemara Lawang. Though the majority of Javanese have converted to Islam, this unique community still clings to their beliefs from the ancient days of Majapahit till today. Like the Hindu Balinese, the Tenggerese worship Ida Sang Hyang Widi Wasa, (the almighty God), along with the Trimurti gods, Siwa, Brahma and Visnu, with added elements of Animism and Mahayana Buddhism.

The ritual time of Yadnya Kasodo Ceremony always go on between on July - August in every 14th day of the Kasada Month in the traditional Hindu of lunar calendar. The ceremony ritual hold in full moon time. This ritaul has major to honor Sang HyangWidhi, the Almighty God, Roro Anteng, as a daughter of King Majapahit and Joko Seger, as the son of Brahmana kingdom.
The Yadnya Kasada is a god offerings to Sang Hyang Widhi Wasa and the ancestors, especially Roro Anteng and Joko Seger. This traditional ceremony ritual held in Pura Luhur Poten located 300 meters before reach the crater. The ritaul activity celebrated all nights until early morning. Tengger tribe’s Ydnya Kasada ceremony ritual aimed at raising the shaman or healer that exist in every village in the vicinity of Mount Bromo. In this festival Bromo Tengger tribe would throw offerings of vegetables, chickens, and even money to inside of the Crater.
During one month before Bromo Yadnya Kasada Ceremony ritual celebrated, The Tenggerese tribes from all villages scattered across the area will gather at the Luhur Poten Temple at the foot of this volcano. One distinct feature that sets the Luhur Poten Temple apart from other Hindu temples in Indonesia is that it is constructed from natural black stones from the nearby volcanoes, while Balinese temples are usually made from red bricks. These temple ceremonies are prayers to ask for blessings from the Gods, and often last long into the night
Right on the eve of the 14th month Kasada Ceremony tour Mt Bromo, Tengger tribe would together carry offerings of livestock and agriculture to Pura Luhur Poten and wait until midnight time when the shaman ordained elders. Next, prepared offerings brought to the top of the crater of the mountain to be thrown into the crater as a symbol of the sacrifices made by our ancestors.
For Tengger tribe, the offerings were thrown into the Crater as a form of vows or gratitude for livestock and agriculture are abundant. In the crater appeared to have waited many beggars and perch population living in the interior. Interestingly they long ago had come here even deliberately set up temporary residence in the vicinity of tengger and hope to get ongkek - ongkek containing offerings of fruits, livestock, also money. Activities perched inland residents who are in the crater you can see from the evening time until noon time the day before the ritual celebrated.
East Java Island tour package from Surabaya, Malang, Banyuwangi, Yogyakarta, Bali :
Most domestics and foreigners have purpose to see the process of ritual during first time until finish in the morning, especially for photographers.
During the Yadnya Kasada Mount Bromo celebrated, You can make a camp near the Pura Luhur Poten to avoid a cold temperature at night while see the Milky Way from Sea of Sand area. After the Yadnya Kasodo ritual finish, You can combine your tour to see Mt Bromo Sunrise tour from the highest peak called Pananjakan peak by using 4 WD Mount Bromo jeep rental.
The activity of Yadnya Kasada Ceremony is a Hinduism ritual that always calebrated annually, in this time, You will see how the hinduism tribes give their dedication to their almighty god Hyang Widi Wasa during 1 night 1 day.
Before visit Mt Bromo, We suggest You to prepare Jacket, Gloves, Hat and other equipments that suitable with mountain condition, So You will able make adaptation to confront the temperature at 03 - 05 degree centigrade along night.

If You have planning to see Yadnya Kasodo Ceremony Mount Bromo, We suggest to make a booking within 2 months before July - August, In order We can supply your facility enoughly. because this tourism always heavy of tourists. For more information about Bromo Tour Package, Accommodation and other trip facilities, You can visit Our Contact.
Share :
Newer Post Older Post Home
Follow :