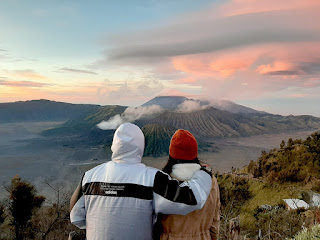 Mount Bromo Tengger, East Java Indonesia is named after occupied by Tenggerese people as inhabitants. Mount Bromo is an active volcano and the crater inside constantly belches white sulfuric smoke. Mt Bromo has an altitude 2,329 meters above sea level, the temperature on the summit about 10 - 15 degree centigrade at day time and 05 - 10 degree centigrade at night.
This volcano is the most popular tourism object in East Java Island due to has verious interesting peaks for photography, the most popular one is Mount Bromo sunrise mostly taken from Pananjakan Bromo peak (the highest peak about 2,770 metres high). Pananjakan peak must reached by 4 WD jeep from nearby hotel.

Other interesting places around Mount Bromo

Beside the sunrise from Pananjakan Mt Bromo, Tengger East Java of Mount Bromo Indonesia, This mountain also become the place for photography, prewedding, sunset photography, and the photography for Mount Bromo Milky Way. Most domestics and foreign visitors always full the Bromo volcano tourism in all season, They will continue their tour to see the Crater, Savannah Hill, Whispering, Mt Batok, and a massive Sea of Sand.
The best time to visit Bromo mountain is on April - September, around these month the weather looks clear and not to much wind. Around January - March, normally get huge rain.
The nearest route to get the Tengger, East Java Island is from Surabaya International Airport and Malang City, through Probolinggo district toward the Cemoro Lawang, Ngadisari village. Another access is from Tosari (northwest) and Lumajang village.

During at 15th century, Princess Roro Anteng (daughter of the Majapahit King Brawijaya) and her husband Joko Seger fled marauding Islamic forces and ending up in safety. Here they developed a new kingdom namely “Tengger” using parts of their respective surnames.
The Kingdom of Tengger transformed into prospered and their religion flourished, but the royal couple were unable to produce an heritage to the throne. In desperation they prayed and meditated on Bromo volcano for many days before the crater opened and the almighty god Hyang Widi Wasa announced that they would be given 25 children, with the condition that the last child named “Kusuma” must be sacrificed to the Crater.
After 25 children were produced in last year later, Roro Anteng and Joko Segger broke their god condition and refused to sacrifice their last borne Prince Kesuma. Eventually, a dreadful eruption followed and swallowed Kesuma into the crater.
To appease the great God, Kesuma’s brothers and sisters held an offering ceremony at the crater once every year until today namley “Kasada Ceremony” and celebrated on Mt Bromo East Java Island on the full moon of the 12th month according the Tenggerese calendar. If you are interested to enjoy The Kasada Ritual, You can make a booking within 2 months before.

The eruption was began since 2004, The eruption episode led to the death of two people who had been hit by rocks from the explosion. The last eruption On Tuesday, 23 November 2010, 16.30 WIB (Western Indonesian Time), the Indonesian Centre of Vulcanology and Geology Hazard Mitigation (CVGHM) confirmed the activity status at “alert” due to increasing tremor activity and shallow volcanic earthquakes. Concerns were raised that a volcanic eruption might be likely occurred. As a precaution local residents and tourists were instructed to remain clear of an area within a radius of three kilometres from the caldera and refugee encampments were erected. The area surrounding the Teggera caldera of tengger remained off-limits for visitors throughout the remainder of 2010 Eventually, Mt Bromo, Tengger East Java erupted a volcanic ash on Friday 26 November 2010 until 23 January 2011
Deformation measurement using electronic distance measurement equipment compared observations at designated measuring points; POS-BRO, POS-KUR and POS-BAT during the period 25 November 2010 – 20 December 2010 with observations from the period 21 December 2010 – 30 December 2010 indicated the shortening of the distance from the POS-BAT or inflation. Observations between 30 December 2010 to 23 January 2011 were reported as relatively stable.
Mount Bromo, East Java Tenger has an extraordinary attraction until popular as the icon of East Java Island, of Indonesia. Not only domestics visitors, but also from all the world, before you decide to make vacation to this mountain, you can choose Mt Bromo tour package by private or sharing tour in travel agency in Surabaya or Malang, then you can make your booking.

INFORMATION :
If You are interesting to visit Bromo mountain, Tengger National Park, You must make a booking within 2 months before because this volcano always heavy of visitors. detail information about Mount Bromo tour price, facility, accommodation and other necessaries, You can visit Our Contact.
Share :
Newer Post Older Post Home
Follow :