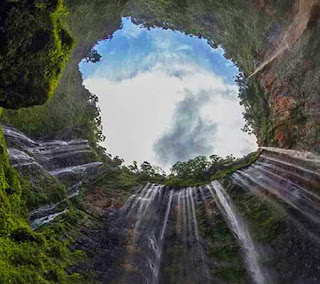 Coban Tumpak Sewu Waterfall tour or Air Terjun Coban Lumajang is the tourists conversation that still in Lumajang of Malang area. To get to this place, You can start your trip from Surabaya Airport, Malang or Banyuwangi to Lumajang City then heading the boundary monument between Lumajang and Malang, about 100 meters before the monument there is an alley down the side of the road if we are on the way to Lumajang . Afer get the parking lot, Then we straight up the river, your transportation is possible placed in the sand miners hut. The trekking continues with a walk along the river about 200 meters, then will find this Tumpak Coban Sewu.

Coban Waterfall called as "Coban Sewu" that meant a thousand waterfall because it flow of water from above is very much along the cliffs . The Coban Sewu Waterfall is so high as to seem sinister take a photo of the cliff top .

The route that has been mentioned earlier is to see the waterfall from above . But if we want to see the Coban Sewu waterfall from below so we can get down through Goa drops followed by a walk along the river against the current . this tourism is different from others. as it pertained to the extreme trekking tour that is synonymous with adventure . We must follow the river up and down on the slippery slope full of moss . Must be extra careful to pass , therefore Coban Sewu waterfall is also arguably extreme tourism, but After you get the view point, You will be treated to a sight that much more exotic. The clarity of water and place was still awake keasriaannya. Coban Sewu is perfect for those who like photography and adventure tour.

How to enjoy Coban Tumpak Sewu Waterfall tour?
If you are interested to enjoy Coban Sewu Falls tour Lumajang, You can prepare some equipments as follows :

You can spend your holiday satisfiedly to find some popular tourism in Java Island, Indonesia. If you need detail information about Bromo tour package and How to enjoy Coban Sewu Tumpak Waterfall / Air Terjun Coban Sewu Lumajang. You can discuss your planning through Our Contact.