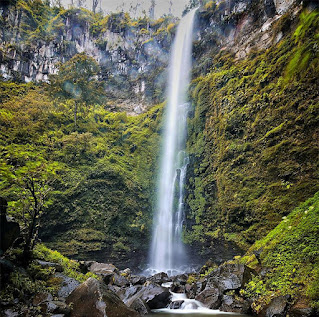 The legend is Coban Rondo derived from the name a Widow. wherein, a pair of newlyweds named Goddess Anjarwati and Raden Baron Kusumo who desires to travel to her husband resident at Mount Anjasmoro. The conflict began, when Goddess Anjarwati opposed her parents prohibition to leave out everywhere because their marriage age still young or just entering Selapan (36 days in discussing Java). Because they insisted their parents prohibition.
Eventually the danger was found in the middle of the road and suddenly they met with Joko Lelono that interested in Goddess Anjarwati beauty, Joko Lelono wished to grab Goddess Anjarwati from her husband Raden Baron Kusumo by long fight between both of them were inevitable.  then Raden Baron Kusumo ordered his soders to hide Goddess Anjarwati due to Raden Baron Kusumo not appeared anymore, Eventually he was known that Raden Baron Kusumo was passed away and let Goddess Anjarwati as a widow. finally called the Air Terjun Rondo.
If You are interesting to enjoy other Waterfall tour package in Java Island, Indonesia, You can read detail tour itinerary below.
Coban Rondo Waterfall has temperature 20-22 degree centigrade, fresh air and cold water will be felt after arrive in Coban Rondo Waterfall tourism area because it settled in Panderman Mountain. to get the Coban Rondo location, just trekking for 15 minutes from parking lot and 10 minutes from the entrance gate by car.
In parking area, there are many typical fruit in Malang Batu City has been sold for visitors such as Apple,Orange, Banana and various local food stores and Souvenirs as well. Coban Rondo tour package provide complete facilities such as Outbond tour, Camping ground, and various Kids Tour that also able to treat a children.
If You need to enjoy the Coban Rondo Waterfall tour with the Malang city tour combination, You can choose on April - September to see a clear and fresh water. For more information about Java Island tour package, and detail price, You can visit Our booking form.
Share :
Newer Post Older Post Home
Follow :