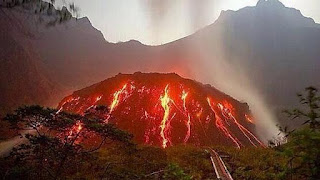 Mount Kelud of East Java Province Indonesia also spelled "Mt Kelut" in Indonesia derived from a name "Kemelut" is an active volcano located in Kediri regency of East Java, Indonesia. It is known for large explosive eruptions throughout its history. More than 30 eruptions have occurred since 1000 AD in 2007, an effusive explosion filled the crater with a lava dome. It last erupted on February 13, 2014, destroying the lava dome and ejecting boulders, stones and ashes up to West Java about 500 kilometers from Kelud.volcano, the crater filled with water in rainy season.

Kelud East Java known as one of the familiar volcano that still in an active volcano arrangement in Java Island Indonesia. Another famous volcano in East Java consist of Mount Bromo, Mount Semeru and Ijen Crater. If you are interested to enjoy hiking package to Mt Kelud of East Java Province Indonesia. You can start your trip from Surabaya Airport, Malang and Banyuwangi Ketapang Harbor. 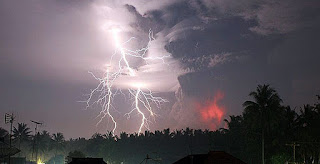 Kelud has unique history, it was one of the few volcanoes whose activities were recorded in Indonesian historical accounts. According to Nagarakretagama canto 1 stanza 4 and 5 (composed by Mpu Prapanca in 1365), King Hayam Wuruk of Majapahit was born in 1256 Saka, which corresponds to 1334 CE, the same year with Kelud erupted. Prapanca argued that this was the divine sign that Batara Gurunata (Javanese name for Shiva Mahadewa) has manifest Himself on earth, reincarnated as the Javanese king. This account also describes the local Javanese psyche at that time (and even up to present) that regarded the natural event such as volcanic eruption, as the divine sign from the gods.

Kelud volcanic eruption on Indonesia most populous blasted ash and debris 12 miles into the air Friday, great eruption killing three people while forcing authorities to evacuate more than 100,000 and close six airports. The overnight eruption of Java island's. it could be heard up to 125 miles away, Indonesia's disaster agency said. Mt Kelud with a height of 1731 meters above sea level has a long history of eruptions, starting from 1000 BC to 2014.

The eruption sounded like thousands of bombs exploding," Ratno Pramono, a 35-year-old farmer, said after returning from an evacuation center to check on his property in the village of Sugihwaras, around three miles from the Kelud crater. "I thought doomsday was upon us. Women and children were screaming and crying."

Ash and grit fell to earth in towns and cities across the region, including Surabaya, Indonesia's second-largest city after Jakarta, with a population of about 3 million. It also fell even farther afield in Yogyakarta, where motorists switched on headlights in daylight, and lay two inches deep in some places.

A 60-year-old man and a 65-year-old woman were killed around Pandansari village near the Kelud mountain when the roofs of their homes collapsed under the weight of the ash and volcanic debris unleashed during the eruption, the disaster agency said. A 70-year-old man died after being hit by a collapsed wall while waiting to be evacuated from the same village, where the volcanic ash reached 8 inches deep in some places.

The large international airport in Surabaya and airports in the cities of Yogyakarta, Solo, Bandung, Semarang and Cilacap were closed due to Mt Kelud explotion reduced visibility and the dangers posed to aircraft engines by ash, Transport Ministry spokesman Bambang Ervan said. Virgin Australia said it had canceled its Friday flights from Australia to several locations due to the eruption, including the resort islands of Bali in Indonesia and Phuket in Thailand.

Beside the hiking package to Kelud East Java, Below We recognize other volcano tour package start from Surabaya, Malang, Banyuwangi, Yogyakarta and Bali :

Hiking to Kelud mountain East Java has easier challange than Hiking Package to Semeru volcano and Ijen Crater Banyuwangi. If You are interested to visit this place through Our travel agent, Our Bromo Java Travel  team will pick You up from your location request around East Java Island then explore this volcano trip activity until finish included all private facility. For detail information about Mt Kelud hiking and Mount Bromo tour package option, You can visit Our Contact.
Share :
Newer Post Older Post Home
Follow :