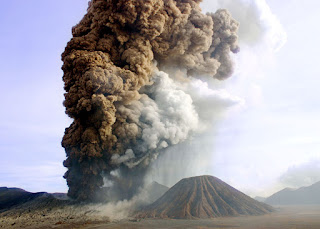 Mount Bromo Eruption has increased during past two weeks on early December 2011 and have been near continuous. On 7 Dec, a narrow plume extended 150 km south from this volcano. The past few days, huge ash emissions have been weaker and mainly drifted westwards, causing Malang's airport in only 30 km distance to close down temporarily. An exclusion zone of 2.5 radius around the crater is in place. Alert level remains at 3 ("siaga") on a scale of 1-4. There is not any effected for visitors to enjoy Mount Bromo Sunrise Tour from second highest summit.

A sharp increase in volcanic tremor recorded this morning from Mount Bromo Crater prompted the Indonesian Volcanological Survey to raise the alert level for this mountain from 1 (normal) to 2 (unrest) on a scale of 1-4.

Except for a weak steam and gas plume rising 50 m from the crater, there are no other changes suggesting any immediate eruptions. The last eruptions was between late 2010-March 2011 and caused extensive damage by ash fall on nearby villages.

Concerning about Mount Bromo Eruption in December 2016, the local government prohibited the foreign and domestic visitors to enjoy Mount Bromo Milky Way tour and Sunrise trip, Sunset tour, Prewedding tour, Sea of Sand and Pananjakan (highest peak on tengger massif), most visitos only suggested to enjoy this volcano and view from second highest peak named Seruni Point. Due to the Eruptions is in being active.

This mountain is one of an active volcano in Indonesia and part of Tengger massif. Its elevation at 2,329 metres (7,641 ft), still lower than Semeru volcano at 3,636 meters high. It is not a highest peak of the massif, but is the most well known. The massive area is one of the most visited tourist attractions in Java Island, Indonesia. The tourism belongs to the Tengger Semeru National Park. This volcano name derived from Javanese pronunciation of Brahma, the Hindu creator god. Sulfur is collected from inside caldera by workers.

The original of Bromo mountain was built up by Eruptions of pyroclastic deposits and lava flows to a height of 4500 m. called Ngadisari, and formed 820,000 years ago.
Paroxysmal explosive eruptions caused Ngadisari village to collapse and formed a Caldera. Cemoro Lawang Ngadisari wall was formed by large amounts of ignimbrite flows. Paroxysmal explosive eruption formed the present structure of the outer caldera. Recent volcanic activity occurred at six Eruptions vents inside the caldera.

At 2015 the Eruption was raised to level 3 alert (Siaga) on 4th December 2015 after an increase in volcanic earthquakes. An exclusion zone of 2.5 km radius was placed around the crater.
2012, an alert level was raised to level 2 (Waspada) on 3rd October 2012, after an increase in amplitude of volcanic tremor. A 1 km exclusion zone was placed around volcano crater. Visual observations reported thin white emissions rising 50 m above the crater.

Seismic activity increased in November 2010. Between 1-7 November two shallow volcanic earthquakes were detected. This increased to 540 between 8-14 November, and 354 between 15-21 November. Continuous tremor was recorded on 22-23 November. Bromo volcano was raised to highest level 4 alert on 23rd November 2010.

Mt Bromo Eruptions occurred on Friday 26th November. Ash reached 500 m above the crater. On 28th January 2011 ash emissions from the Crater caused the cancellation of some international flights to Bali. Thousands of passengers were affected by disrupted flight schedules after ash emissions from this volcano reached Bali on 27th January. A volcanic ash advisory reported ash emissions extending 200 nautical miles east of the volcano, and rising to a height of 18,000 ft.

Two people were killed during eruption at Mt Bromo on 8th June 2004. The phreatic eruptions lasted 20 minutes. Many buildings around nearby towns of Malang and Probolinggo were covered by a light coating of ash 2 hours after eruption occurred. On 29th November 2000 an eruptions occurred at Mt Bromo volcano mountain. An ash plume drifted 40 km from the crater.

Bromo mountain Eruptions occured from 15 February to 27 March 1948 destroyed 500 hectares of land on NE of volcano. This was the strongest eruptions since 1804. On 7th August 1929 eruptions began. huge ash fell over Malang until 25th August. Most foreign and domestics visitors still prohibited to enjoy the Sunrise tour, Crater, and another trip package type to avoid unwanted accident.

Below is detail Mt Bromo Tour Package option from Bali, Surabaya, Malang, Yogjakarta, Malang :
If You are interested to enjoy the trip during an eruption activity on Bromo mountain, You must see the eruption from around 3 - 4 kilometers distance because the smokes blowing contain poisonous gass. For detail information about other Mount Bromo tour package option, Accommodation, and trip package facility, You can visit Our Contact.