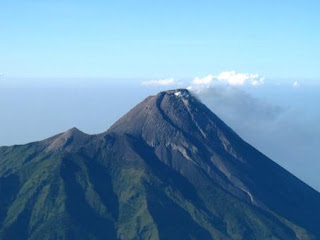 Mount Arjuno is stand closely to Mount Welirang, These volcanos also known as twin mountain, because both of these volcano stand very tight. Mt. Arjuno peak lies on the same ridge by mountain peaks Welirang, so that the complex is often referred to as Arjuno - Welirang. Arjuno - Welirang complex itself is in two older volcanoes, Mount Ringgit to the east and Mount Lincing in the south. Area fumarole with sulfur reserves are found in a number of locations of these mountains.

Mount Arjuna also spelled Mount Arjuna and Welirang is spelled Wlirang, Its a stratovolcano (break) in East Java, Indonesia with an altitude of 3,339 m above sea level. Mt.Arjuno is administratively located in the border town of Batu, Malang and Pasuruan and is under the management of Forest Park Raden Soerjo. Arjuno Volcano is the third highest mountain in East Java after Semeru Volcano Summit and Mount roar, as well as being the fifth highest in Java. Usually this is achieved from three mountain climbing point is well known that from Lawang, Tretes and Batu. Arjuno name comes from one of the puppet character Mahabharata, Arjuna.

Mt.Arjuno is one of the active volcano as the place, Climb to this volcano has similar duration with Climbing tour package to Semeru volcano. In addition to the height which has reached more than 3000 meters, this mountain has attraction view, One of them is the waterfall tourist attraction Grandfather Bodo is also a hiking trail to the summit Mt. Arjuno. Although Attraction besides Grandfather Bodo waterfall there is also another waterfall, but tourists rarely come other waterfalls, probably because of the location and tourist facilities are less supportive. In the area of ​​its slopes there are also springs from the Brantas River water deposits Arjuno volcano. Brantas River springs located in Sumber Brantas, Bumiaji, Batu which is the second longest river in Java after the Solo River. Some of the famous tourist destinations up to the rest of Indonesia and abroad are also located on the slopes of Arjuno volcano, among which are Tretes, Batu and Taman Safari Indonesia 2.

climbing package toward Mt. Arjuno started from the North side of  Tretes village through Mount Welirang, and the East (Lawang) and from the West (Stone - Selecta), and south (Karangploso), also from Sumberawan, Singosari. Sumberawan village is the village handicraft center in the district Singosari, Malang and is the last village to prepare before starting the ascent. Purwosari can also pass more easily bypassed, because only half an hour from the highway and immediately got Tambakwatu.

If you are interested to enjoy trekking package to volcano in East Java Indonesia, You can read detail volcano climbing package combination below.
If you are interested to enjoy Welirang Trekking Package or Arjuna Climbing, You must start from Surabaya Airport at early morning around 04.00 - 05.00 AM, If you can not start in early morning, You can stay 1 night first in Tretes regency, then start Climbing from your hotel on the second days. Finish enjoy Welirang Arjuno climbing package, You con continue visit the Cemoro Lawang for to enjoy Mount Bromo trekking, or Semeru trekking package. Because Wlirang and Arjuno Volcano, located near to popular volcano named Mount Semeru and Bromo volcano.