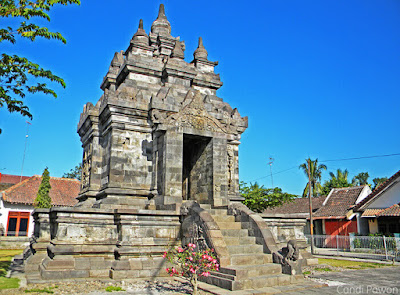 Pawon temple, Yogyakarta is a Buddhist temple have been one of the destination place for Yogyakarta city tour. It is located between two other Buddhist temples, Borobudur which is located 1.75 km to the northeast and Mendut which is located 1.15 km to the southwest. Its straight line location suggesting there was a symbolic meaning that binds these three temples. That is why both Pawon and Mendut are called uppa ungga or part of Borobudur Temple. Pawon built during the Syailendra dynasty in 8th - 9th centuries; but examining the detail and style of its carving, Pawon Temple is slightly older than Borobudur.

The Pawon Temple slightly faces northwest and stands on a square base. Each side of the stairs and the top of the gates are adorned with carved Kala-Makara, giant face flanked by reliefs of beautiful women. It is ornamentis design that commonly found in the tops of the doors of ancient Javanese temples.
Kala-Makara shape is a figurative ornament of the manifestation of spirutual exorcism power towards evil spirit and evil deeds. The outer wall of Pawon is carved with reliefs of boddhisattvas, Buddhist divinities, beings who dedicate themselves for the happiness of the creature other than himself in the universe, and Taras, the symbol of the independence of spirit for achieving sacred life; it is also a symbol of compassion and realization that everything will vanish on its given time. There are also reliefs of kalpataru the tree of life, flanked between Kinnara-Kinnari, twin bird with human head. The square chamber inside is empty with a square basin in the center of it.

There are also rectangular small windows were found, probably for ventilation. The roof section of is crowned with five small stupas and four small ratnas, smaller stupa with diamond shaped crown. Because of its relative simplicity, symmetry and harmony, the historians dubbed this small temple as "the jewel of Javanese temple architecture", in contrast with tall-slender East Javanese style counterparts as founds in later Singhasari and Majapahit period.

The original name of this Buddhist shrine is uncertain. Pawon literally means "kitchen" in Javanese language, which is derived from the root word awu or dust. The derivation connection also suggests that Pawon Temple was probably built as a tomb or mortuary temple for the dust of cremated king. Local people name Pawon Temple as "Bajranalan" based on the name of the village.
Bajranalan was derived from the Sanskrit word Vajra (thunder or also a name of Buddhist ceremonial tool) and Anala (fire, flame). These three temples are still functioned up to this day. Once a year, in the contemporary era during the full moon in May or June, Buddhists in Indonesia observe Vesak annual ritual by walking from Mendut passing through Pawon and the walk ends at Borobudur. Most probably, the Pawon Temple served to purify the mind prior for ascending Borobudur. Pawon Temple can be visited from 06.00 in the morning until 05.00 in the evening and suitable enjoyed after Borobudur Sunrise.